The official weather app with widget for Android of the Weather Service of the Autonomous Province of Bolzano/Bozen - South Tyrol/Südtirol. Regarding all content of the homepage as well as new functions, including push notification thunderstorms for each municipality: as soon as a major rain shower forms, a push message will automatically be sent.

In serious and emergency situations the South Tyrol Civil Defence Department will warn and inform the population via the public information system.

The app can now be downloaded free of charge from google.play and from Apple App Store. 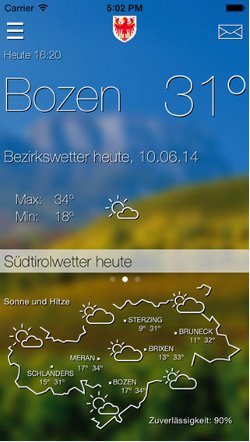